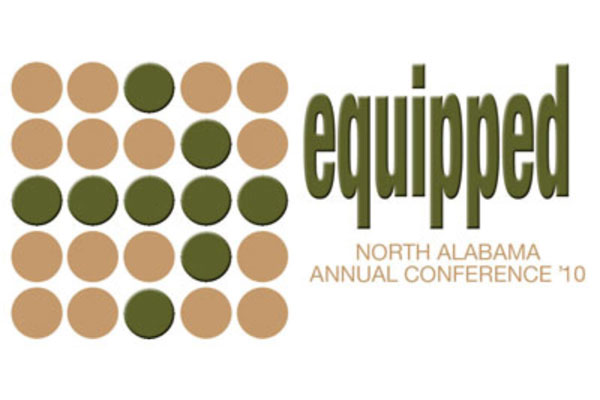 The gifts he gave were that some would be apostles, some prophets, some evangelists, some pastors and teachers, to equip the saints for the work of ministry, for building up the body of Christ, until all of us come to the unity of the faith and of the knowledge of the Son of God, to maturity, to the measure of the full stature of Christ.
—Ephesians 4: 11-13 (NRSV)

by Danette Clifton, Director of Communication

On June 3, 2010, members of the North Alabama Conference gathered at ClearBranch UMC. The day began with a family picnic. There were grilled hamburgers, games for the children, live music, mission projects and mission displays. This was a designated time for Conference members to gather and fellowship, catch up with new friends and make new connections.

Following the picnic there was a dialogue session for those interested in being delegates to General and JurisdictionalConferences in 2012. Gloria Holt and Bill Morgan led the session.

Following a dinner break, members of the Conference then gathered at Huffman UMC for the Memorial Service. This special time of worship is a time the Annual Conference remembers those clergy and clergy spouses who have died in the last year.

Rev. Tom Bell preached a sermon based on Romans 8:26-30. He said, “Tonight we are going to celebrate some ordinary people who God called to do some extraordinary things for the Kingdom.”

Those people honored during the service were

The 2010 North Alabama Conference opened on the morning of June 4, 2010, at ClearBranch United Methodist Church. The focus of the Conference is one of the five Conference priorities -- Effective Leadership.

After Bishop William H. Willimon called the Conference to order, Conference Secretary Rev. Sherill Clontz set the bar (areas where voting members may sit to have their votes counted) of the Conference.

The first report presented was the Statistician’s Report. Conference Statistician Rev. Lori Carden noted that the report did not contain good news. She explained that the numbers in every major area for the Annual Conference (membership, worship attendance, baptisms, etc) saw declines in 2009.

During the report she also presented the Property Resolutions naming the 12 churches to be discontinued as of this session of the North Alabama Conference. Those Churches included the following churches:

Following the statistical report, the Conference moved into a stirring time of worship. Rev. Marcus Singleton challenged the Conference asking “Has all of God been invited into the Church?”

Focusing on the Holy Spirit, Rev. Singleton said, “We have supplanted the Holy Spirit with church growth models and leadership models… Effective leadership is not enough. … If we expect God to transform our church we have to broaden the invitation… Holy Spirit is giver of life.”
He concluded, “Until we are able to testify about what the Holy Spirit is doing in our lives we will continue to get what we got.”

Following the sermon, Rev. Steve West told the story of Moses through song.

Conference Secretary then led members of Annual Conference through the organization of Conference and setting the consent agenda. Members then divided into the Clergy Executive Session and the Lay Orientation Session. This is the only time clergy and laity meet separately during the Annual Conference.

Following a lunch break, members were called back into the Worship Center as Worship Leader Rev. Bruce Williams led the gathering music. He was accompanied by Dr. Anthony Powell on piano.

Using 21st century technology, missionary John Funk opened the afternoon session with prayer via Skype. He and his wife Suzanne are missionaries from North Alabama serving in Bolivia.

The Conference approved the consent agenda and Conference Secretary Sherill Clontz shared the results of the worldwide vote of the United Methodist Constitutional Amendments. Members to the North Alabama Conference voted on those amendments at the 2009 meeting.

Conference Lay Leader Ellen Harris then presented the report from the Lay Ministry Team. The report included election of the District Lay Leaders and the Laity Address. Ellen Harris concluded the laity addresses reminding Conference members, “As long as we remember that God is the center of the Church and the center of our lives and that we are living out that the church is everywhere we are.”

Dr. Bill Brunson then presented the report of the Board of Ordained Ministry (BOOM).

During the BOOM report the Conference recognized those clergy and their spouses who are retiring. Those clergy include:

The Board also recognized those pastors who were memorialized during the Thursday night memorial service.

Dr. Bill Brunson then made a special presentation to the family Rev. Matt Miller. Matt was in the process of applying for Provisional Member when he died in January. He had turned in all his materials and the Board was able to review them. He was given honorary provisional membership in the North Alabama Conference.

The Board then recognized 27 newly licensed local pastors. Bishop Willimon welcomed them to the Annual Conference.

Bishop Willimon then announced the clergy appointments were fixed and on the Conference website.

During the Connectional Ministries time Rev. Matt Lacey and Rev. Mike Stonbraker made a presentation to Rev. Ray Crump the Director of the Disaster Warehouse in Decatur. The North Alabama Conference has reached out to help those facing disasters in Haiti, Georgia, Mississippi, Tennessee and those in Albertville and other areas of North Alabama. Rev. Mike Stonbraker read a proclamation from Alabama Governor Bob Riley in recognition of Rev. Crump and the volunteers from the Disaster Warehouse.

The Conference then heard a report from Sumatanga. Chair of the Sumatanga Trustees Mike Byrne presented the report. He thanked the Conference for its support of the camp. Last year the Camp was near bankruptcy. Byrne announced that Sumatanga was debt free. He also announced that reservations and usage of the faculty is up. He then took time to thank outgoing Executive Director Bob Murray and to introduce new executive director Michael Coward.

Conference Members then received an invitation from Rod Moss, Executive Director of Promise Homes (formerly UMRA). He thanked the Conference for its support of this ministry with adults with intellectual disabilities. He then invited them to enjoy ice cream as a gift from Promise Homes during the afternoon break.

As members gathered following the break, Jerry Haas of the Upper Room shared a video with the Conference. The Upper Room celebrates 75 yrs in 2010. This year the Upper Room will print the 1 billionth copy of its daily devotional guide!

The Conference then heard the report from the Board of Pensions presented by Rev. James Haskins, Scott Selman and Sandy Reynolds. There was discussion of the Conference Health Care plan – HealthFlex. Insurance rates continue to increase due to the high risk group in which insurance companies place clergy. All the reports passed.

Following the report a couple of moments of personal privilege were granted. Including a motion from the floor by Rev. Robin Scott and Dr. Bill Morgan who requested the Conference take $100,000 from its pension reserves to give in 5 equal payments over 5 years to Central Conference Pension Initiative. After much discussion the motion passed.

The Conference then passed the Committee on Nominations report and electing officers.

Rev. Bill Gandy made the report from the Center for Congregational Development. He noted the following pastors who are leading new church starts:

The Conference business session closed with an invitation by Rev. Alan Weatherly, pastor of Asbury UMC in Madison. He invited the North Alabama Conference to meet as Asbury in 2011. That invitation was accepted.

Following a dinner break the Conference gathered at Canterbury United Methodist Church. During the Service of Ordination of Deacons and Elders at Canterbury UMC, 1 Deacon and 10 Elders were ordained. The Ordination of one additional Elder was also recognized. Those new deacon and elders are:

Saturday morning started early with the Mission2Gather 5K Run / 1 Mile Fun Walk for Human Need started Saturday of Annual Conference. All proceeds benefitted Mission2Gather mission agencies and mission congregations of the North Alabama Conference working together to engage persons in mission and ministry to those in need.

Members and visitors to the North Alabama Conference then gathered for the Saturday learning session at ClearBranch UMC. The day was dedicated to the Conference theme “Effective Leadership” and featured guest teacher Rev. Adam Hamilton the United Methodist Church of the Resurrection in Leawood, Kansas

Rev. Adam Hamilton opened up the morning session and explained that his goal for the day was for a leadership revival in North Alabama. He also told those gathered that he had been praying for this Conference and the local churches. He also explained that members of the Church of the Resurrection have been praying for every congregation in North Alabama. Individual members were each given a name of a local Alabama congregation and pastor and will pray for them during the month of June.

As he began to teach, Hamilton said, “I don’t want to be part of a movements with our best day in the past. …I think our best days can be ahead of us.”

During the three teaching sessions he focused on three concepts that are a part of vivrant churches. Those concepts were Effective Leadership; Effective Worship and Preaching; and Evangelism.

In the morning he challenged both clergy and laity to be effective leaders not just managers. He noted that leadership requires a mission, vision and plan.

After a morning break, Rev. Hamilton focused on the need for effective worship and preaching. He focused specifically on preaching. Noting that once Methodist Churches were known for the best preaching. He encouraged clergy to work toward that goal again by making sure worshippers learn at least one new thing a week.

Following the lunch break, Bishop Will Willimon reported that nearly $11,000 was collected during the Ordination Service on Friday night for the Annual Conference Mission Offering. This year’s offering is going to the Central Conference Pension Initiative (CCPI) is a long-term solution that provides retirement financial security for retired pastors, lay workers and surviving spouses in Africa, Asia and Eastern Europe who are struggling to survive post retirement.

Bishop Willimon also noted that he would give his Episcopal Rule regarding pastor consultations within 30 days.

Adam Hamilton then spent this final session of his teaching time focusing on Evangelism and the Future of Methodism.

He encouraged the crowd to think about three questions – Why do people need Jesus? Why do people need the Church? and Why do people need your particular church? Through telling his story and stories of others, Rev. Hamilton helped learners think through how to prepare for visitors; ideas for outreach; and how to disciple visitors to become church members.

Saturday ended with the Commissioning Service. Rev. Bill Brunson, Chairperson of the Board of Ordained Ministry preached. He noted that the Great Commission Jesus gave in Matthew 28 is still our commission today – both clergy and laity.

During the service, the Annual Conference commissioned 8 Provisional Clergy Members and recognized one elected to Associate Membership.

The service ended with a sending forth to both clergy and laity given by Bishop Will Willimon.